After Cannes, I made a two day stop over to Turkey.  I’ve heard so many good things about it and have been wanting to go, but SOMEBODY stopped me because he deemed Turkey “too dangerous” to visit.  Since I bought my ticket to Cannes on Turkish Airline, a stop over in Istanbul was inevitable.  However, it didn’t stop the old man from worrying.  He insisted I took off my wedding band and engagement ring before leaving.  I don’t think my husband’s intention was to make me feel single again, but I was basking in attentions from Turkish men who were trying to grab a piece of me or my money.  Either way, I was thoroughly enjoying myself in this ancient, exotic and amazing city.

After two weeks of non-stop working in Cannes, I left all the travel details in the hands of my bestie/travel partner Miss J.  I told her I want to eat, shop and sleep.  So when she told me that we will be staying at a three star hotel called “Rose Garden Suites” with no swimming pool, and no elevator, to be totally honest, I was a bit peeved.  However, when the taxi pulled up, I was pleasantly surprised.  It was a charming little hotel nestling in the old part of the town.  It is clean, charismatic, and designed with Ottoman style.  It was a great bargain for what we were paying and breakfast was included!  As for carrying the luggage up the stairs, you can ask the staff to do that with a generous tip! 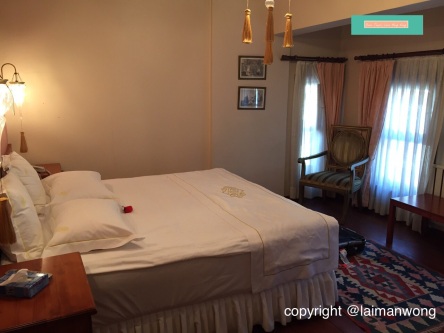 The hotel was located in Old Town, and within a 10 minute walking distance, we were able to see the Blue Mosque,

And Hagia Sophia! We hired a tour guide to walk us through this church-turned-mosque beauty that was originally constructed in the 4th century.  I walked into it and was immediately taken back by its austerity and history.  It’s amazing how influences from both religions co-exist and rests beautifully in this historical site.  Unfortunately at the time of our visit, a huge scaffolding was erected in the middle of it.  It doesn’t stop one from being in awe of it. 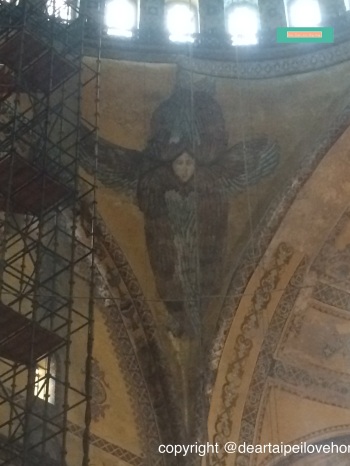 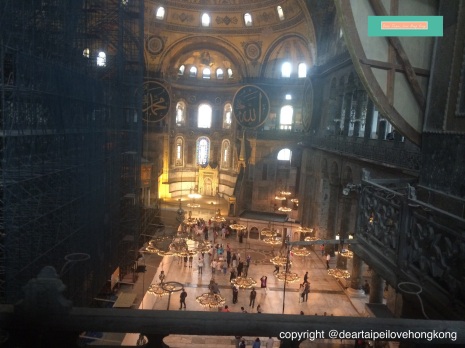 The second day in Istanbul was actually last day because I was taking a red eye home at night.  I decided to leave our little tour group, take the public transportation and venture out on my own.  I wanted o see for myself the 5 star luxury that I didn’t have the budget for on this trip, the “Ciragan Palace Kempinsky Hotel”.  The plan was to take the train to the nearest stop and then take a taxi.  Before I was always with my girlfriends and felt safe with them.  When I walked alone on the street, the grabbing and the attention from the overly-touchy feely Turkish men, who were trying to convince me to look at the carpet he was selling became a little bit too much to handle.  I was calm and polite, until this boy who was helping me to buy a train ticket, started following me into the station.  I clutched my handbag closely, and told him to bugger off!  I even got off a few stops earlier, just to make sure he wasn’t following me.  Call me paranoid but I think the husband would have been proud.

The hotel was built in the 17th century and in 1992 it was turned into a hotel with the construction of the hotel rooms.  If you’re staying here, don’t be expected to stay in a palace because it is reserved for bigger functions, galas or weddings.  I loved the grandiose and the decadence in its architecture.

From the garden you can see the Bosphorus Bridge that separates Europe and Asia. 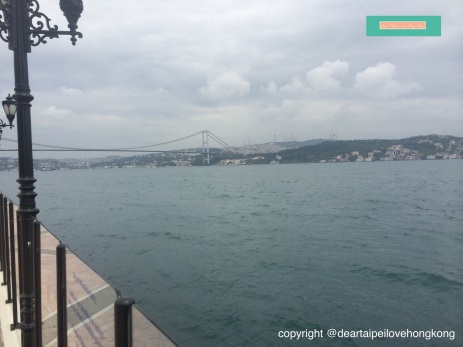 After all, it is a palace, so of course the interior decor, the chandeliers and the tile design, the staircase are all fitting for royalties.

It cost me less than $40 Lira for a cup of coffee and a cake that was nothing to write home about.  I snapped some photos, took a leisure stroll in the garden, and hopped back on a taxi to head back to my hotel.  Even though my trip there was short, Istanbul was nothing short of breath-taking scenes, rich history and passionate (aggressive) people.  I know I’ll be back next time with F to live dangerously and explore the unknown 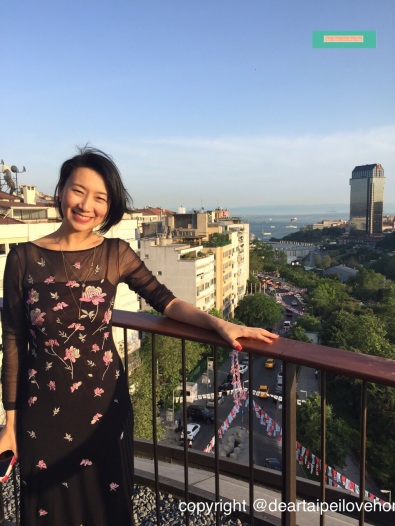 First day of online learning!
Well I can’t go to Singapore but I can get this Michelin Star Soy Sauce Chicken from Hawker Chan’s at Taipei 101 food court. I’ve not eaten there when I lived in Singapore but this Taipei’s rendition pretty awesome! The chicken is so tender and juicy and the lomein so tasty with just a hint of shrimp paste. Can’t wait to go to Singapore and get it from the original shop.
I guess you can say a robot made my coffee this morning.
Spotted at Xinyi District -Robotic arm at work making me my first coffee of the day!