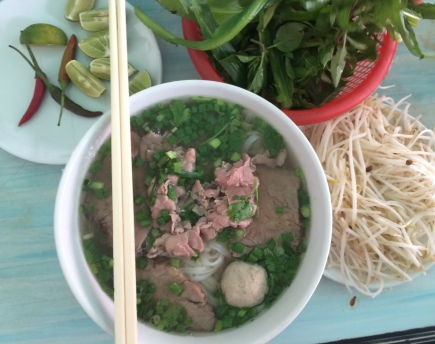 This is arguably one of my favorite things to eat in the world –  Pho Bo – Vietnamese Beef Noodle Soup.  My love affair with it began in college and I’ve been hooked ever since.  There’s something about slurping down a spoonful of rich, savory beef broth, paired with flat, soft rice noodles, and then add a mouthful of fragrant herbs like basil, spring onions, bean sprouts, mint, and cilantro to the mix.  Oh! and who can forget the squeezed lime as the finishing touch.  It’s heavenly.  Even though I’ve been told that Danang is not a town famous for its pho but one MUST venture out and try how the locals like their pho when in Vietnam, right?

Our friend Jimmy was the unofficial tour guide of the trip and we basically just followed whatever he had planned for us.  The sick 12kg toddler strapped to me 12 hours of the day was not going to dampen my spirit.  I told Jimmy that we MUST to go out and taste authentic Pho.  So one afternoon, we were out, hunting for the best Pho that Danang has to offer.  I’m not sure where Jimmy got his recommendations but when the first shop on his list was not opened, this is where we went next.

One of the things about eating at tourist traps is that they are relatively clean and presentable to foreigners.  So when we pulled up, I had some reservations about the red buckets underneath each table.  What are they for?  Putting bowls and plates when you’re done?  Throwing away trash?  I’m not sure but I was hungry and didn’t care.  When the first bowl of Pho Bo was served, I was giddy.

Not bad right?  The beef was the perfect pink color and really tender.  The beef balls were surprisingly fresh and good.  The broth is probably not as rich as I expect but I appreciate a lighter touch once in a while.  I didn’t like that the bean sprouts were cooked when served, I liked mine raw, but this is $3 US dollars a bowl who cares? 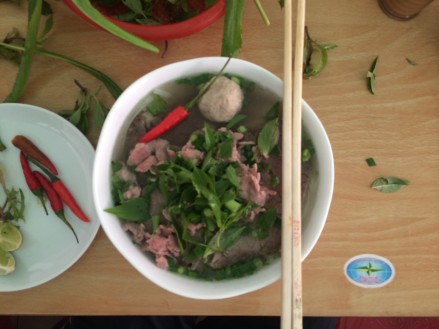 It was good enough to chow down a second bowl.  每人都幾乎都再來一碗

Another highlight of our Danang trip is trekking down and finding this local shop, famous for their “Banh Mi”, the Vietnamese Sandwiches.  This is a shop that Anthony Bourdain visited when he was in Danang.  Since the episode aired, the shop has moved into a bigger store with sit down space.  I love these sandwiches too but the circumstances that I was under, i.e, screaming and crying toddler chained to me, prevented me from really enjoying the sandwich.  Everyone else was raving about this so let’s see what are they put in them. 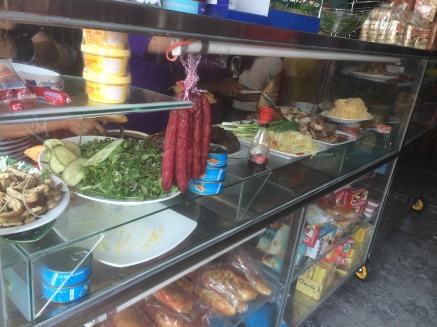 Looks simple but there’s so much flavor into that one bite which all implodes in your mouth.  It’s different from what I’ve had before in Vietnam.  There’s a homemade sauce that gives the whole sandwich a spicy kick which elevates it to a different level.  My take away from it was the french baguette which was so fresh and crunchy.

We also went to the restaurants that people would refer to as the “tourist traps”.  This one in particular had good reviews on trip advisors but what we ate was nothing to write home about.  I ordered my favorite Vietnamese Rolls but I think I can make one better than this.  However, I did enjoy their Vietnamese Ice Coffee a whole lot.

It was a short trip but I managed to check off all the food that I wanted to eat.  A big thank you to our buddy Jimmy for being the perfect Foodie Tour Guide!

Well I can’t go to Singapore but I can get this Michelin Star Soy Sauce Chicken from Hawker Chan’s at Taipei 101 food court. I’ve not eaten there when I lived in Singapore but this Taipei’s rendition pretty awesome! The chicken is so tender and juicy and the lomein so tasty with just a hint of shrimp paste. Can’t wait to go to Singapore and get it from the original shop.
I guess you can say a robot made my coffee this morning.
Spotted at Xinyi District -Robotic arm at work making me my first coffee of the day!
The XingTian Temple illuminates at night. Less people, less crowd, but the instant peacefulness it gives you when you walk in is the same. 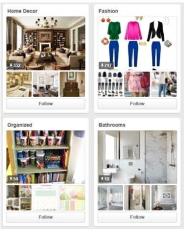